Over the last months, I followed with great sadness what was happening to Greece. Ripped to pieces in the press, this beautiful country has had a tough time this year in Europe. For me however, Greece is what paradise on earth would look like – a beautiful country, with beautiful people and culture, and a culinary cuisine to die for. As Thucydides put it so nicely many many years ago – “We are lovers of the beautiful yet simple in our tastes, and we cultivate the mind without loss of manliness.” Hence I decided to take him up on that and pay Greece a long over-due visit.

Again, following my rule of thumb, we are staying away from a) tourism b) where everyone else goes to tick a box and c) party islands. Our choice this time is Syros, a small island just in front of Mykonos in the Cyclades, 75 nautical miles from Athens. Syros is a special place and the pulse of the Cyclades. Although the island is only 83.6 km² small, it has a rich history of industrial power in the 19th century and a waste historical background. No wonder Ermoupoli is the capital of the Cyclades and one of the most architecturally fascinating ports in the Mediterranean.

I have to admit, the Blue Star Ferries boat ride of 4 hours took it out of us after our flight arrived at 1am the same morning, but there is nothing more beautiful than watching the sun rise above Athens while you are slowly heading into the deep blue of the Aegean Sea.

Syros loses much of its tourism to Mykonos, which is only half an hour away by boat and 5x more expensive and over-run. You are after the Greek stereotype we all know so well of white-washed houses against blue sky and harbour promenades to flaunt your legs/money/boat? You can have all of that in Syros, on a much smaller and nicer scale and with a lot more local heart and love.

When walking through the streets of Ermoupoli, which has been build on a naturally amphitheatrical site, you can feel the pride of the locals over their little island with its Roman and Venetian architecture, and you hardly hear a foreign word. Tourism isn’t big here, Syros is a pit-stop for most before Mykonos and I am so grateful for that, as it leaves us here for a week to enjoy the beauty and calmness of this island all to ourselves (plus a few French tourists, who seem to have somehow got the same memo as us, but you can count them on one hand so no harm done!) 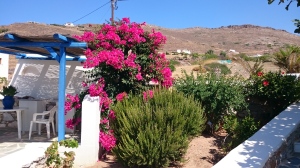 We were umming and ahhing about where to stay – the south coast is known for its beautiful beaches, and Ermoupolis for its relaxed city feel. But we wanted small – REALLY small. And ended up in Finikas, a tiny fishing village on the western shore of the island. Sporting a tiny harbour with an even smaller promenade, it has everything you can wish for: tavernas overlooking the sea, 98% filled with locals, Finikas beach if you are after sand between your toes, small local bars just by the beach and a number of holiday studios scattered over the hills overlooking the bay. 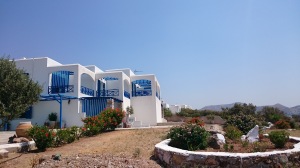 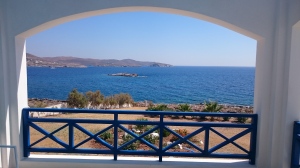 Our residence of choice was Sea View Studios. Owned by the most adorable Greek couple Daizy and Mano, 5 white washed little studio apartments are tucked on the hills just above Finikas harbour, looking over to Posidonia. The name of the B&B says it all and I kid you not, they have not over-promised. Our balcony opens up to a 360 view of the Aegean Sea and over the very well maintained garden of the property. Blue is the colour of the day, for the next 8 days actually. And you don’t have to venture far if you want to escape the sweltering heat of the Island, the property has its very own private beach with the clearest water you can think of. Want a holiday off the grid? Here you are, no kids, no noise, no music, no annoying neighbours – just the sounds of the tide breaking on the cliffs and Daizy telling the gardener to sweep the leafs properly. Couldn’t get better than that – but it can! As for breakfast, courtesy of Daizy and Mano’s never ending fig tree, it’s pretty much an Eat-All-You-Can fruit buffet. I am already on my 2nd bowl on day 3. 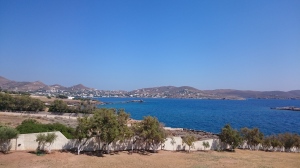 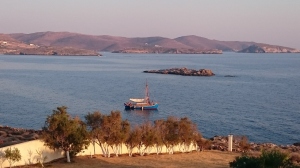 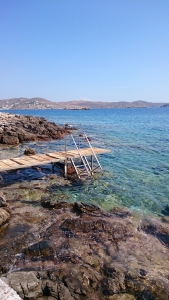 “Sunset is still my favorite color, and rainbow is second.” (Mattie Stepanek)

“Keep your face always toward the sunshine – and shadows will fall behind you.” (Walt Whitman)

I’m realising that this blog is developing a little bit of a Spanish theme when it comes to travel tips, but I wanted to share my trip into the Andalucían Mountains here. As said before, I tend to stay away from the mainstream places in Spain to go – you will not find me in Marbella for longer than 5 minutes top.

Spring is always a great time to go to Spain – it’s not crowded, it’s out of season (no school kids!) and it’s bearably hot. I love going over the Easter period, which is family time for the Spaniards – all the towns and villages are scrubbed up for “Semana Santa”, you only find Spanish tourists and it’s all about celebrating, food and quality time together. This time, ee decided to leave the trodden path at the coast and drive inland just past Nerja, a little costal town east of Malaga. This took us up into the mountains of La Maroma, heading towards a little town called Cómpeta. It’s situated 638 above sea level and sits snug in the mountains with little whitewashed houses, narrow winding roads, no cards and many picturesque squares decorated with flowers. The town itself is surrounded by olive tree groves, avocado fields and the steep mountains of Sierra de Almijara.

I absolutely fell in love with this place. Driving up the winding A7207 through either thick clouds or fog, you suddenly break through the bad weather front and are hit by clear air, bright blue sky and a light breeze. It is a difference of day and night the coastal and mountain weather. If you have a bit of a light stomach, I’d recommend a sick bag for the journey up, the road has something of a roller-coaster which even my stomach didn’t find funny after 20 minutes.

Cómpeta is a great place for relaxation, great views, fresh food and good hikes. You only have to leave the town and walk up towards the sports field and you are in the mountains, with several tracking paths to choose from.

In the evenings, everyone puts on their Sunday best for dinner –  food and eating together is still a celebration here, what I absolutely adore. Cómpeta’s residents are diverse in both culture and nationality, with many residents originating from other countries across Europe such as the UK and other Northern European countries including Germany, Denmark, The Netherlands and Norway. Our B&B La Vista was owned by a Dutch guy, who was just as lovely as his little 3 story whitewashed house with 7(1) rooftop terraces. We had a light room full of character and full access to the roof – a 360 view you will not forget, it’s definitely a breakfast to remember. 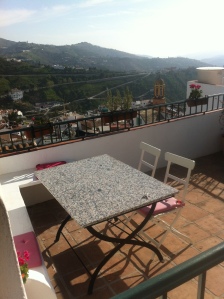 We only stayed for 1 night, but Cómpeta is a place where you can easily spend a week, try all the different little bars, have your morning coffee on a different plaza each day, and hike the surrounding mountains and villages.

I’ve always been a “coastal-tourist” when it comes to Spain and not much of a city-breaker. I love the chilled way of life by the beach, the friendliness of the locals, the seafood and the calmness that takes over every evening – for me that is holidays.

However, you should never become too much of a routine person and I’ve been accused of that many times, so a couple of months ago I decided to extend my horizon and do my first city break in Spain since 5 years: Madrid.

Madrid has always been sold to me as the Spanish city of the locals – forget Barcelona where every hen and stag do goes, if you want to experience a real Spanish city, go and head to Madrid. And so I did.

Luckily, it didn’t make me break with all my routines: Madrid is a culinary food heaven where you can eat your way through the city and almost through most of what Spanish cuisine has to offer on a plate.

Already in the late morning hours, this place is buzzing. Just off the Plaza Mayor, locals come Mercardo de San Miguel to enjoy their first glass of red wine or beer of the day way before lunch time, accompanied by a cone of Jamon Iberico, Pulpo and Ostras. But you don’t have to be a fan of the savory start to the day, plenty of bakeries offer loaded trays with Spanish sweetness, such as Pastel de Nata and the all famous Churros. This place officially became my favourite because it’s a great mix between a street food market and market where you can buy your weekly groceries, all exquisitely displayed in a romantic old market hall. It’s open all day until 11pm in the evening, so you can come back in the evening to continue the eating fiesta. 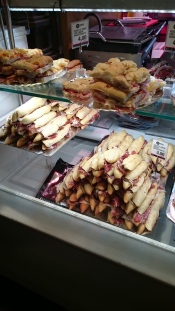 You are here to eat, so avoid the Metro and discover the city by food – simply walk from Mercado San Miguel to Mercado San Antón in the Chueca quarter to work up a bit of appetite This market is more on the traditional side, with an amazing food court upstairs where you can chose your own tapas from 1 Euro per piece – starting from Baccala to Pulpo, Chorizo, Coquetas and smoked Salmon. Keep an eye out for the hidden stair case which will take you up to the rooftop bar – a hidden gem overlooking the roofs of Chueca. Prizes are reasonable and it’s not over-run, you will mainly find locals from the neighbourhood here and hardly any tourists. 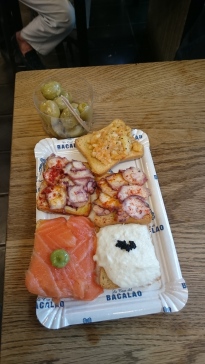 Whether you like bar hopping, traditional tapas bars and a bit of live Music – this area has something to offer for everyone’s taste. The streets and Plazas are lined with tables where you can have your first aperitivo of the evening to warm-up for the night and then trail down the side streets to once again eat and drink your way through Madrid. If you want to experience the old Madrid, visit the Vinoteca Barbechera – don’t be put by its touristy location, it serves some of the pest Pulpo and Calamares, old school waiters and excellent house Rioja. 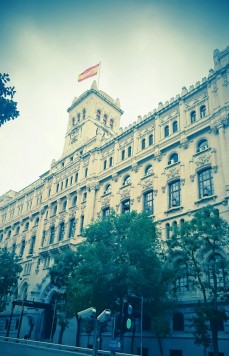 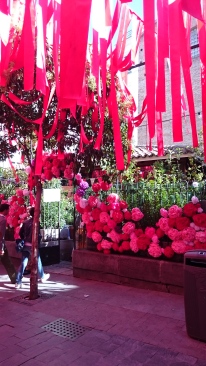